The life of every human usually follows the same pattern: birth, growing up, getting older, and finally death. When it comes to bugs in software, everything is almost the same letting us talk about the existence of a bug life cycle. So let's take a closer look at the issue.

What Is a Bug?

In a nutshell, a bug is any non-compliance with project requirements that results in unexpected and therefore incorrect work of an application. A bug comes to life in the event if a developer involuntary makes an error in the source code. However, some bugs are caused by compilers that produce incorrect code. So, the main mission of a QA engineer is to detect as many bugs in an application as possible and prevent their slipping into production.

Definition of a Bug Life Cycle 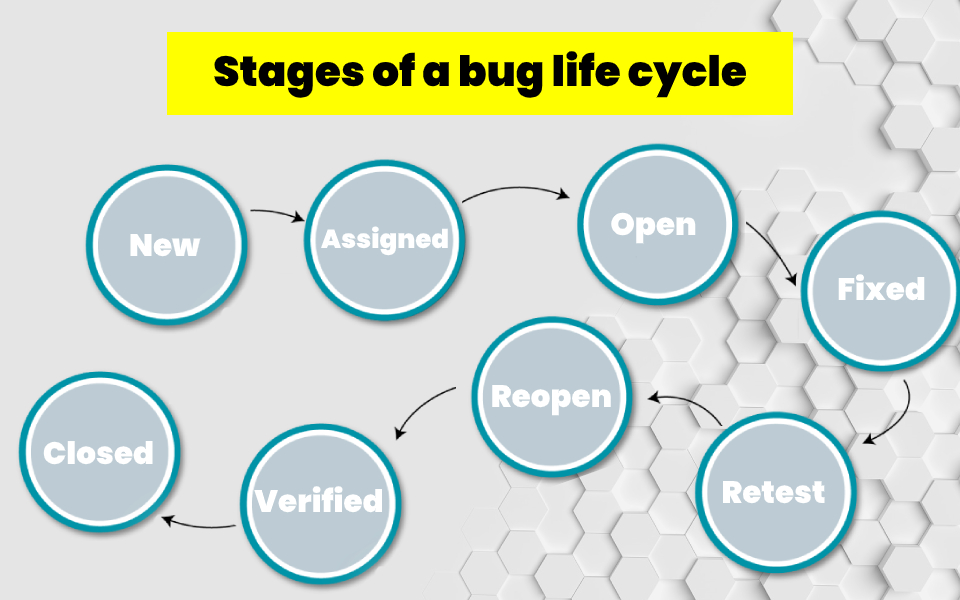 A bug life cycle can be defined as a sequence of varied stages through which a bug gets during its existence until being resolved or closed. Every stage of a bug life cycle corresponds with a certain bug status. It makes sense to consider each bug status in detail. So, let's get this show on the road.

A bug obtains the "New" status after having been revealed and added to a bug tracking system.

A bug obtains this status after having been entrusted to a certain developer for working on it. Thereafter, the assigned developer becomes a bug owner.

This status indicates that the developer has embarked on the bug inspection and fixing. If after inspection the developer comes to a decision that the bug is not appropriate, he/she may assign another status to it such as Duplicate, Rejected, Deferred, or Not a Bug. Let's find out what each of them means.

Rejected: a bug obtains this status if a developer thinks that it is not a real defect.

Deferred: bugs of the low priority that can be fixed in one of the ongoing releases, obtain the "Deferred" status.

Duplicate a bug acquires the "duplicate" status if a bug with a similar issue or concept has already been reported.

Not a Bug: as its name implies, a bug acquires this status if a developer doesn't think that the reported issue is actually a bug.

When the work on bug fixing is completed, the bug in question obtains the "Fixed" status. It gives a sign that it is the turn of a QA engineer to get into a game.

This status means that a QA engineer has to conduct retesting in order to check if the bug has been indeed fixed, and a corresponding functionality works as expected.

If the bug has been reproduced during retesting, i.e. a developer hasn't managed to eliminate it, a QA engineer reassigns this bug to the developer for reinvestigation and its status turns to "Reopen".

If the bug has not been reproduced during retesting, then a QA engineer considers it as really being fixed and changes bug status to "Verified".

As all corresponding procedures are completed, and the bug actually does not exist anymore, its status turns to "Closed". 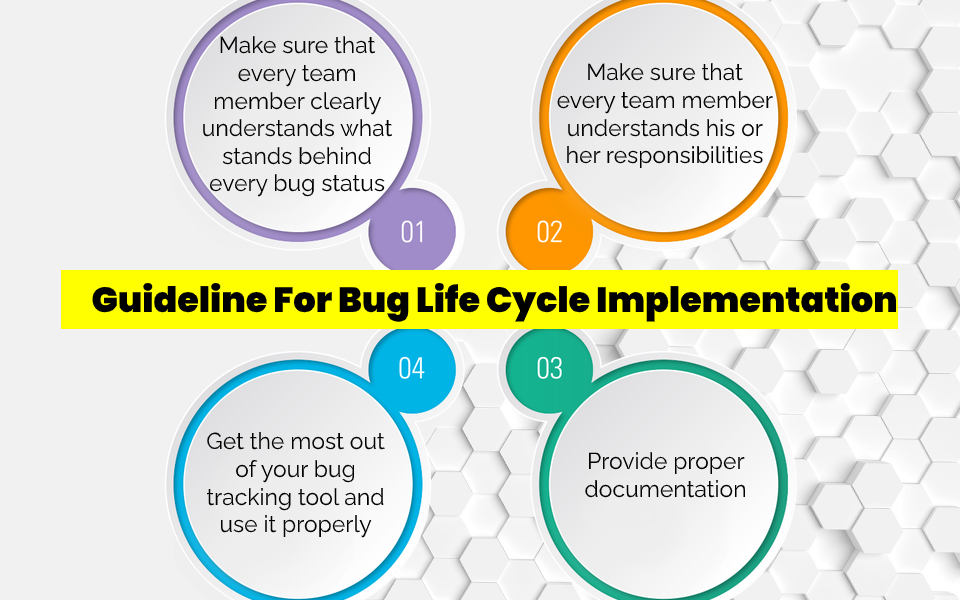 To treat a detected bug properly and easily track the work progress, it is essential to implement a bug life cycle. Below you can find some useful tips on this point.

To deal with a bug in a proper way, each engaged team member must know through which stages a bug goes and which statuses it can have. Besides, it is essential to clearly understand the exact meaning of each particular bug status.

Make sure that every team member understands his or her responsibilities

Throughout the life of a bug, different team members deal with it explicitly or implicitly. Bug handling is not usually the responsibility of one and only person. Various members of a team deal with the bug depending on its status. Therefore everyone should know what he or she should do while being assigned. This approach simplifies the work of each individual and gives an opportunity to get more accurate results within the shortest possible time.

Your bug tracking system should be carefully adjusted, used, and controlled in order to provide consistency in the bug life cycle workflow. A bug tracking system while being properly used significantly optimizes bug management and enables QA engineers to get reliable bug metrics for further study and analysis.

To avoid any misunderstandings, it is strongly advised to document the bug life cycle. Therefore, in the course of the work on a project, there will not be any confusion in respect of any bug stage or state. 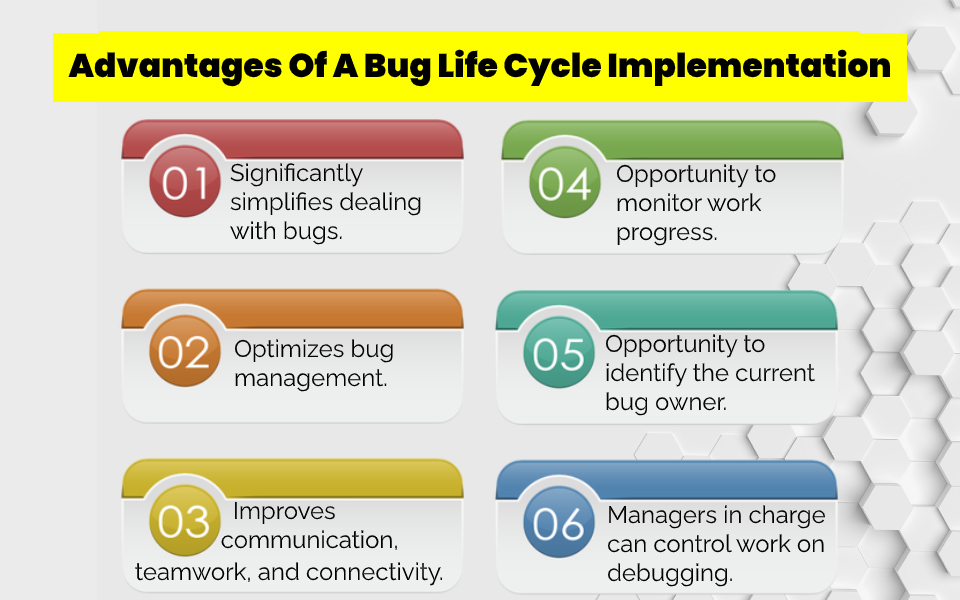 The bug life cycle implementation is indeed useful as it significantly simplifies dealing with bugs, optimizes bug management, and improves communication, teamwork, and connectivity. Bug statuses give the opportunity to monitor work progress and identify the current bug owner. In such a way managers in charge can control work on debugging whereas all team members know when it is their turn to deal with the bug.

Can bug life cycle cause any difficulties? We do not think so, as it actually serves to avoid all possible challenges related to bug management. Still, the thing you should pay attention to is that the presented above bug life cycle is not the only one possible. It can differ depending on the leveraged bug tracking system, project, and preferences of a product team. In fact, it can be even considered as an advantage rather than a difficulty, as every team can customize a bug life cycle to make it meet the workflow needs.

What is a nonreproducible bug?

It is a bug that reveals itself just under certain conditions, which are not easy to identify or reproduce again. Such bugs can be a great challenge for testers to deal with.

What to do if a bug has been rejected by a developer?

As a rule, developers provide comments in a bug tracking system explaining the reason for rejection. If according to the developer's opinion this bug is not a bug at all, but you have another view, you can engage a team leader in order to verify project requirements and figure it out. If the reason for rejection is the inability to reproduce the bug, a QA engineer should more carefully study the conditions that trigger bug appearance.

What is a bug report?

A bug report can be defined as a description of the detected bug including conditions and steps leading to its reproduction.

What information should a bug report contain?

A bug report should be brief but clear and consistent. It should contain a summary, preconditions, build version, priority level, severity level, steps to reproduce, actual and expected outcomes, and attachments (i.e. screenshots, video) if any.

What is bug management?

Bug management is an entire process of bug identification, investigation, and all subsequent actions required for its elimination.

It is impossible to create a totally bug-free application from scratch. As a result, product team members have to deal with the most various bugs every day. After having been detected a bug goes through different stages being handled by different people and obtaining a corresponding status on each stage. Therefore every bug has a life cycle that can be long or short according to the situation. Whatsoever, knowing the bug life cycle, a team can effectively deal with the bugs and handle all related issues easily and quickly.