How to test mobile applications?

Testing your mobile applications is generally considered as a complicated, time-taking and expensive procedure as compared to typical web-application or desktop-applications testing. Why is that so? Because, there are a number of different versions of mobile phones in markets, each having its own OS and different networking conditions.

Some of the challenges involved in mobile testing include

Different stages of QA testing of a mobile application:

A typical QA testing of mobile applications shall involve the below-mentioned steps:

First of all, prepare a test case for the app under scrutiny.

Identify the scripts that can be automated and amend those scripts according to your testing requirements.

Identify the testing methodology and whether you would go for manual testing, automatic testing or a combination of both? This is an essential requirement because users shall be using different types of devices. So, deciding on manual, automatic or cloud simulator testing will help you prepare you appropriate test cases.

Prepare test cases for manual and automatic testing and execute all those test cases.

Perform usability testing to assess issues with application usage, content and navigation protocols – This form of testing is the key for the applications to be accepted by the end users.

Carry out performance testing – It shall involve checking the application for scalability, responsiveness, usage of resources, and stability according to the prevalent standards.

Execute security and compliance testing – Check the application from security point of view by testing SQL injection, Session Hijacking, SSL validation, Data dump and so on.

In the end, prepare a summary report on tests performed.

Whenever you undertake the task of QA testing the mobile applications, you should keep in mind the following five key points:

When deciding between using real devices or emulators, you should take into consideration the following factors; the OS version, screen size, network and data connectivity, RAM/ROM of device, and form factor.

Mobile emulators are usually more efficient during the opening periods of the application development particularly in an agile testing environment. While physical/real devices are best for beta testing – which involves testing different features such as: how the application behaves and connect with different devices; network density; mobile networks; and battery states.

Another important strategy for testing the mobile apps is the use of mobile cloud, which offers a testing environment where all the apps can be installed, organized, tested and implemented. Such cloud testing environments also has the capacity to support complicated applications and offer instantaneous testing results like DevOps does for traditional desktop applications.

As stated above, testing mobile applications is quite complicated, and with more complexity involved, it becomes difficult to find suitable automatic tool to test mobile applications. Similarly, if you use real devices for testing, you have to perform testing on more than 10 different devices. That is why emulators (though not a good substitute to real devices) are used. Mobile testing approach should include an optimum combination of both real devices and emulators in order to enhance the test coverage ratio under different networking and OS conditions.

Testing mobile application in actual network environments give you a better picture of how the application behaves. Using simulation networks will offer additional value to your testing strategy. Some tips for choosing Ukrainian QA company. 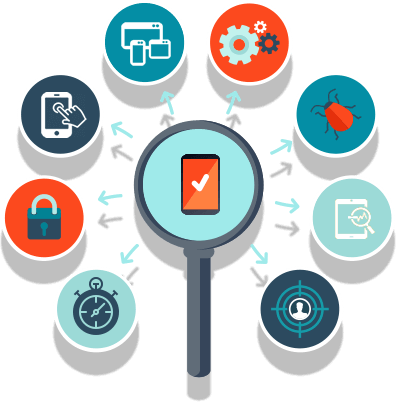 Whenever we have to test a mobile application, you have to follow some rules and regulations; so, if you make a checklist for any type of application then it becomes easier for you to test the next applications.

Due to the complexities involved in mobile application testing, we cannot ignore the value of a streamlined mobile testing methodology and procedures involved. Despite all the challenges in hand, if you plan for your target devices, select the optimal testing methodologies, use appropriate simulation and testing tools and execute your test cases, you can surely move your application to a successful launch.