Integration Testing: Overview on How to Perform, its Types, and Tools

To delight its users with a great experience, every application should undergo consistent testing. That is why the QA process is rather sophisticated. The multilevel attitude to testing enables product teams to achieve great results and deliver a software product of high quality. In this context, we would like to throw the light on the peculiarities of integration testing considered to be extremely beneficial.

What is Integration Testing?

For Which Reasons Integration Testing is Essential?

Newbies may ask if it is reasonable to spend time and effort on integration testing, especially if unit testing and system testing are at your disposal as well. The answer is "Definitely!". Actually, there are a lot of reasons for this, and you can find the most prominent of them below:

It is not enough to know that each software unit works correctly on an individual basis. It is also essential to make sure that these units can interact with each other as required.

Different components are built by different developers who may understand project requirements and business logic in different ways. For this reason, it is important to check whether every developer has got it right and developed corresponding components in compliance with the specifications. Integration testing is incredibly useful in these terms as it helps reveal various misunderstandings.

Integration testing pays particular attention to the data stream. It is indeed important as data tend to undergo numerous changes while being moved from one component to another. These data modifications may cause serious defects later. Thanks to integration testing, serious issues can be identified and eliminated at the outset enabling teams to save a ton of time and money.

Integration testing plays an important role because it also checks the software component interaction with different external tools and APIs. In such a way, QA engineers can make sure that data sent by these APIs or tools is accurate, and that generated in return responses are appropriate as well.

Under current conditions, project requirements are frequently changed. As a result, developers quite often deploy the changes missing out on unit testing. Therefore, integration testing is an additional defense line that can catch possible defects as far in advance as possible.

Integration testing can be executed in a variety of ways. For this reason, a few types of it are differentiated.

If a team executes big bang testing, all components of the software are joined together at a single blow to be tested as a single entity. This attitude requires minimum planning and is appropriate mostly for simple projects, but when it comes to large-scale ones, big bang testing is hardly the best possible option. First of all, QA engineers can get to integration testing only when work on the development and integration of all components is finished up, and this, in its turn, can take plenty of time. Besides, as all developed components are combined with one stroke, there is no chance to test critical components precisely, and if during testing any issue is noticed, it can be rather challenging and time-intensive to identify which component has triggered a corresponding problem.

Still, incremental integration testing, in its turn, can be executed in a few ways as well. Let's consider each one.

In this context, it is worth remarking that the lower software components undergo testing while the higher components are not ready yet. To emulate these unavailable components, QA engineers make active use of drivers that provide corresponding inputs for the lower components.

Bottom-up testing is useful as critical issues at the lower level can be uncovered at the outset, and all the necessary actions can be taken in due time. On the other hand, its major shortcoming is that possible critical defects in the higher components are revealed at the extreme end.

As its name implies, this integration testing, first of all, focuses on the higher components. Later, the lower components are added and tested bit by bit.

The key merits of this integration testing type are:

Ability to have an early software prototype;

Critical components are checked on a first-priority basis and main design flaws can be revealed and fixed up to time.

However, this integration testing type is not perfect as well. Its chief shortcoming is the necessity to create plenty of stubs. When highly sophisticated software is developed, the stub creation can take even more time than emulated feature development.

Hybrid testing is a simultaneous execution of the two previous types of integration testing. i.e. bottom-up and top-down. Hybrid testing begins with the medium level and contemporaneously progresses up and down. So, you may guess that in this circumstance both drivers and stubs are actively leveraged.

In general, hybrid testing is rather complicated and requires more investments and resources as well as particular skills and experience. 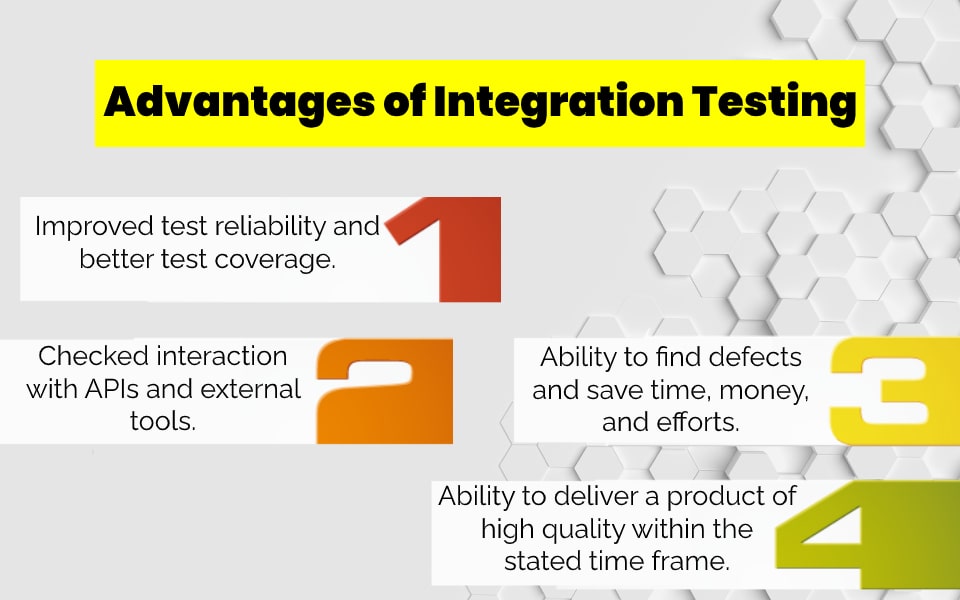 Ability to find defects and identify possible software bottlenecks at the early stages of product development and, therefore, save time, money, and efforts;

Ability to deliver a product of high quality within the stated time frame and budget. 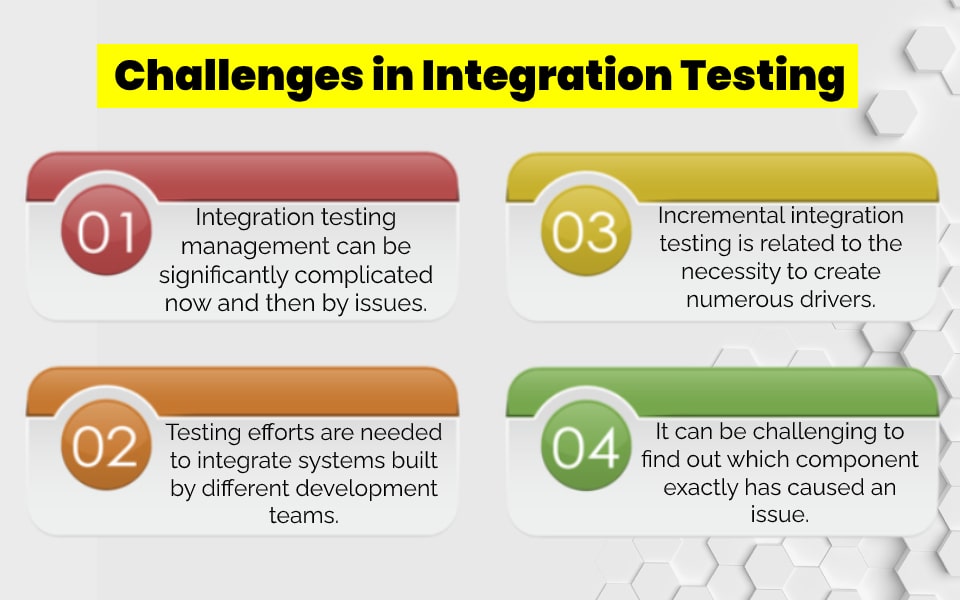 Integration testing can be rather challenging, and QA experts may face some difficulties:

Integration testing management can be significantly complicated now and then by issues connected with platforms, databases, environments, and so on and so forth;

Integration testing can be extremely time- and resource-intensive;

Incremental integration testing is related to the necessity to create numerous stubs and drivers;

It can be challenging to find out which component exactly has caused an issue if the big bang approach is used for the execution of integration testing. 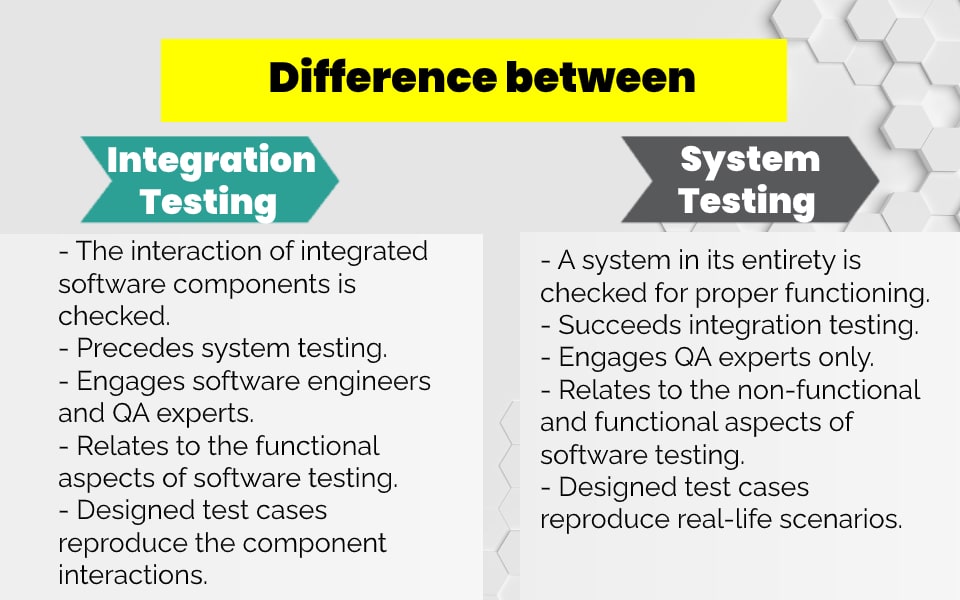 System testing and integration testing provide great opportunities for the improvement of software quality. We suggest giving consideration to the difference between them to make it clear why each one is important in its unique way.

What tools are used for integration testing?

Integration testing is an essential part of the DevOps lifecycle, and plenty of tools are offered on the market these days to assist you with the automation and execution of integration tests.

Below you can see the most widely used tools:

SMART INTEGRATION TEST ACCELERATOR (SITA), and many others.

Integration testing plays an important role in the QA process helping considerably improve product quality. By checking the interaction of certain components, this type of testing gives an opportunity to find possible defects as early as possible, and therefore save much time, money, and effort. There are several attitudes to integration testing execution and a great variety of tools can be used to automate it. So, integration testing can provide you with numerous benefits and considerably simplify succeeding work on the developed product.