What is compatibility testing
Home

What is compatibility testing 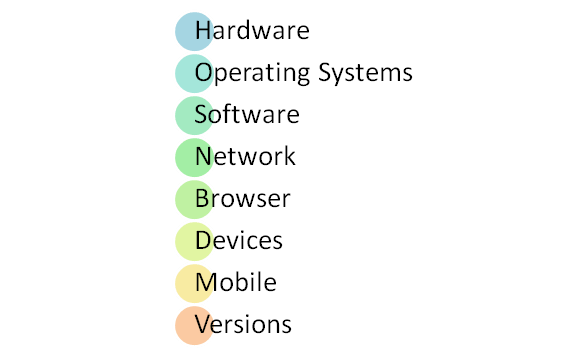 Compatibility testing is a sort of non-functional software testing. It is used to ensure interoperability of the system/ web application or mobile application/website built with multifarious objects (browsers, hardware platforms, operating systems and so on). Its definition is to guarantee that a user is able to run the software on many sorts of user configurations without annoying glitches. It is testing of the app or the product built with the computing environment.

Compatibility testing comprises the next about the planned operating environment for each software product:

Compatibility testing helps to ascertain how well a system is carried out in a special environment which holds hardware, network, operating system and other software and so on. It tests if the application or the software product built is reconcilable with the hardware, operating system, database and other system software or not.

When a QA team runs a compatibility test, the software is tested on many hardware systems under different conditions. For instance, the QA team will test your software on:

Let's consider five things you ought to know about compatibility testing:

You need plan and checklist for carrying out the compatibility testing. It adds a test cycle at the end of the project (or extra scope to the sprints), and requires time, money and resources. It indicates the best ability for correct estimation if the products work fluently in the targeted operating environments. The last means that:

#2 - Compatibility is the last thing that project teams think about

Scrambling to deliver NFRs close to the delivery date is a common and inadmissible view-point.

You ought to consider in advance the compatibility requirements that are required for confirming these demands. So you are able to ensure that your scope is tuned to deliver a product that works essentially with the targeted hardware, networks, peripheral systems.

For instance, if you work on a project that delivers redesigned UI for your company's website using existent infrastructure, your scope for compatibility testing can be the following:

Now let's think about the resolve for a scrum team that delivers the web pages. It's quite possible that when the sprints begin, you are able to arrange a test environment that gives an opportunity to plan all the compatibility tests pertinent to the sprint's scope.

So depending on your project, organization, time, cost and other limitations, you are able to choose building compatibility testing into regular test efforts, or make it a stand-alone cycle. Or even both.

#4 It is unpractical and unnecessary to aim absolute coverage

A good practice is to run a compatibility checking when your website loads on the customer's browser. You should optimize the strategy to hold only versions that account for 98% of the customer base. Support systems as a help desk to manage the unsupported 2% to 5% at a fraction of the cost and time you to require continue supporting older configurations.

#5 Forward and Backward compatibility are attainable, but not 100%

When it comes to the compatibility, plan to support the past and a couple of next generations of the computing environment. And accommodate the testing efforts towards just this aim. There is no need in supporting less than 5% of the customers that still use OS 7, 6 or 5.

Tools that are used in compatibility testing

This tool helps to check your application in different browsers.

This one holds requisite drivers for a specific hardware platform and it guarantees information on the tool to check for CD burning cycle with CD burning tools.

This tool is used for running the apps on a lot of operating systems as virtual machines. Many systems can be connected and compare the results.

The most significant use of compatibility testing is to guarantee whether developed software works under multiple configurations (as stated in requirements documentation). This testing is necessary to check whether the application is compatible with client's environment.