What is Regression Testing? How to Get Started and What Tools to Use

A bug-free, high-performance, and user-friendly product is a goal on which the whole product team works. Regression testing, in its turn, makes a significant contribution to the development of such high-quality products. But what is behind this term? Let's find it out.

What is regression testing?

There are varied types of software testing. However, regression testing stands out from them due to being extremely comprehensive and helpful.

Regression testing is a type of software testing that checks whether recent code changes have affected earlier developed functionality. In the course of regression testing, previously successfully passed test cases are rerun to check key functionality and ensure the correct work of the whole product after software modification.

Why is regression testing important?

There is no need to explain why new functionalities should be checked. But what about previously developed ones? Why does regression testing focus on this? The reason is that there can be a strong dependency between any software modification and the earlier developed features. Even a minor tweak can considerably affect software performance and behavior, resulting in critical defects. Regression testing tends to cover as many test cases as possible, eliminates all possible risks, identifies system weaknesses, and uncover possible defects. It serves as a filter that catches bugs related to the recent modifications. Besides, regression testing, especially automated, helps developers quickly get feedback on product performance after new code deployment. Therefore, if certain defects are uncovered, it is much easier to understand their root causes and fix them fast.

The process of regression testing

Regression testing is conducted at all testing levels whenever software undergoes any modifications and before an upcoming release. So which changes can have a significant impact on the earlier developed software parts? These are:

As a rule, the following plan of regression testing execution is used to get the maximum results:

Make thorough analysis and define possible side effects as well as functionality that may be disrupted; 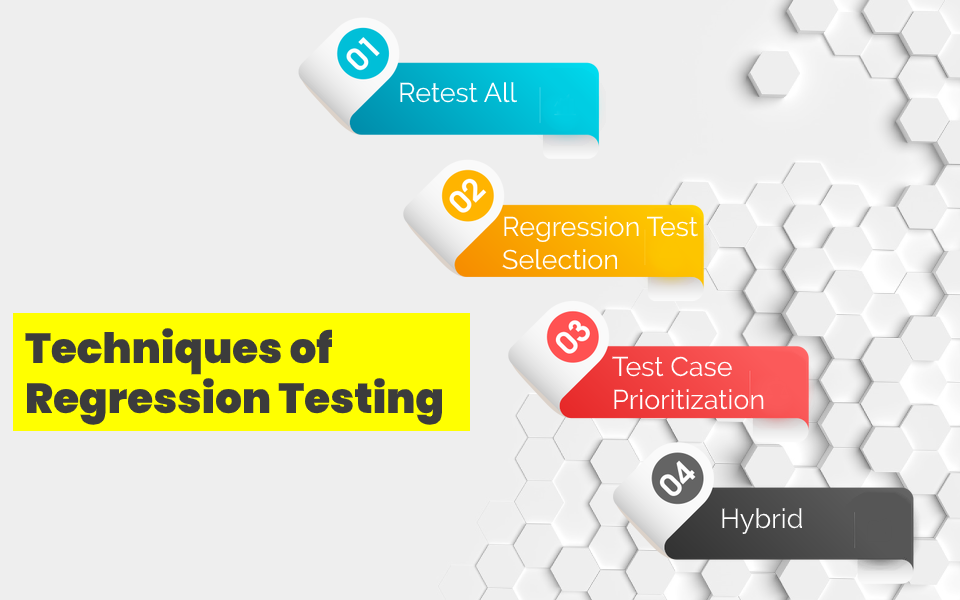 As an app is built, it becomes more difficult, time-consuming, and expensive to check all available test cases. Several techniques have been developed to help sort out the most appropriate test cases for regression testing. Depending on particular conditions, QA experts can use a certain technique to get a maximal result at a minimum expenditure of effort.

According to this technique, all available test cases must be rerun to inspect the whole software as thoroughly as possible. Such comprehensive testing is time-incentive and expensive. That is why it is better to use it only if numerous software modules undergo significant changes.

Utilizing this technique, QA engineers run not all but just certain test cases that are picked up on the ground of the preliminary analysis, i.e., only those test cases must be rerun, which cover modified or probably affected modules.

This technique defines the sequence of test cases. Primarily test cases with high priority must be rerun, and then others in descending order. In such a way, critical defects are uncovered as early as possible.

The hybrid technique combines the concepts of the two previous ones. According to it, particular test cases are picked up on the ground of their priority.

Various types of regression testing can be applied depending on a testing level, project requirements, goals, nature of modifications, available resources, and deadlines,

This type of regression testing is associated with unit testing. Developers rerun unit tests checking every code unit paying no regard to dependencies between them.

This type of regression testing is performed by virtue of the available test cases while a product remains unchanged. Thus, QA engineers may study a project for effective planning of future activities.

This regression testing examines software from top to bottom and includes all available test cases without exception. It requires a ton of time. As a rule, customers avoid it because of its costliness. Still, sometimes, it is helpful and necessary.

This type of regressive testing helps considerably reduce time and effort as only those test cases are rerun that cover modified or probably affected modules.

This regression testing is conducted when there are changes in project specifications, and new test cases are drawn up to cover them. It enables QA specialists to dive into new version testing, keeping away from earlier tested functionality.

This regression testing is used when there are numerous changes, especially those that can significantly impact the root code.

This testing is used when a new code is added to the codebase. Its main goal is to ensure proper software performance after new code addition.

Regression testing and retesting are often misused and misunderstood by QA novices. On the one hand, both of them are associated with test re-execution. Still, on the other hand, they have different aims and are conducted under different conditions.

Retesting is conducted to verify whether a failed test is passed successfully after debugging or double-check a certain test case if there is any need.

In its turn, regression testing ensures that the whole system works appropriately after any code modifications, which may disrupt the earlier developed functionality. 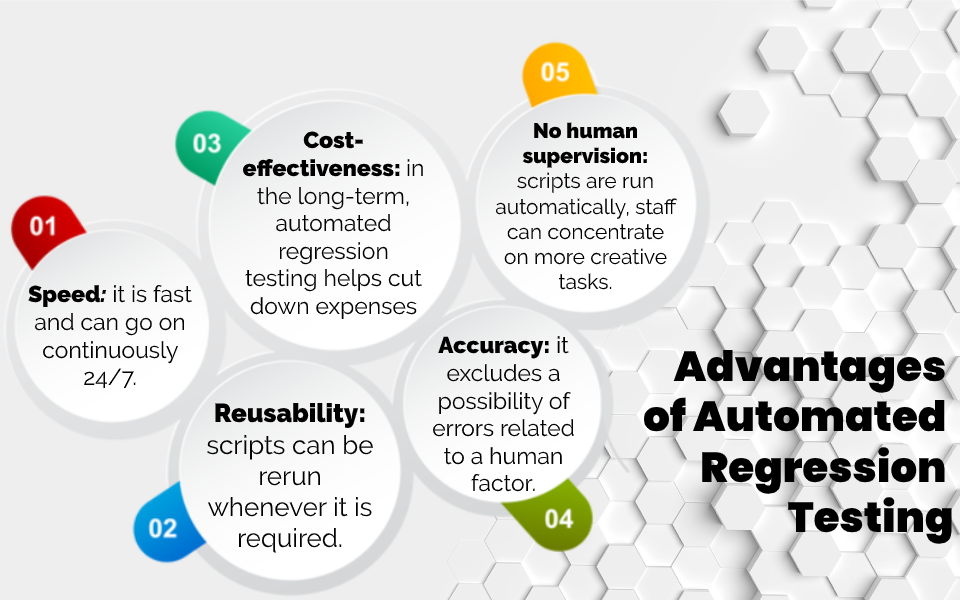 The most suitable automation solution must be used, and the appropriate scenarios must be automated to reap the benefits of automated regression testing. Besides, it is essential to draw up sufficient test cases, create effective test data, and continuously update scripts.

The major advantage of automated regression testing is its convenience that is explained by the following things:

Speed: it is fast and can go on continuously 24/7.

Reusability: scripts can be rerun whenever it is required.

Cost-effectiveness: in the long-term, automated regression testing helps cut down expenses for large projects, as just a single professional QA engineer can cope with the whole process, whereas manual regression testing requires an army of QA specialists.

Accuracy: it excludes a possibility of errors related to a human factor.

No human supervision: scripts are run automatically, and staff can concentrate on more creative and high-level tasks.

So, test automation has multiple pros. Nevertheless, automated testing cannot completely replace manual testing, as there are still plenty of scenarios that cannot be executed by scripts. For this reason, QA experts use both approaches to achieve maximum efficiency.

The number of manual QA engineers should be continuously enhanced in order to meet deadlines.

There is a high risk of human errors, as regression testing is fairly monotonous.

The advantages of regression testing in Agile

Nowadays, most development teams use Agile methodology due to its flexibility and speed. However, the fast development process should not result in a lower quality level. That is where regression testing is extremely helpful, as it is carried out in each iteration known as a sprint during which a particular software part is built.

Merits of regression testing in Agile are apparent, and the main among them are:

Top-notch quality due to the regular, thorough testing of the main functionality;

Keeping software stable as the software is inspected after every new increment;

Early bug detection as the software is checked after any code modification.

Easier identification of root causes and, as a result, faster debugging as developers receive quick feedback on software running after each new code deployment. 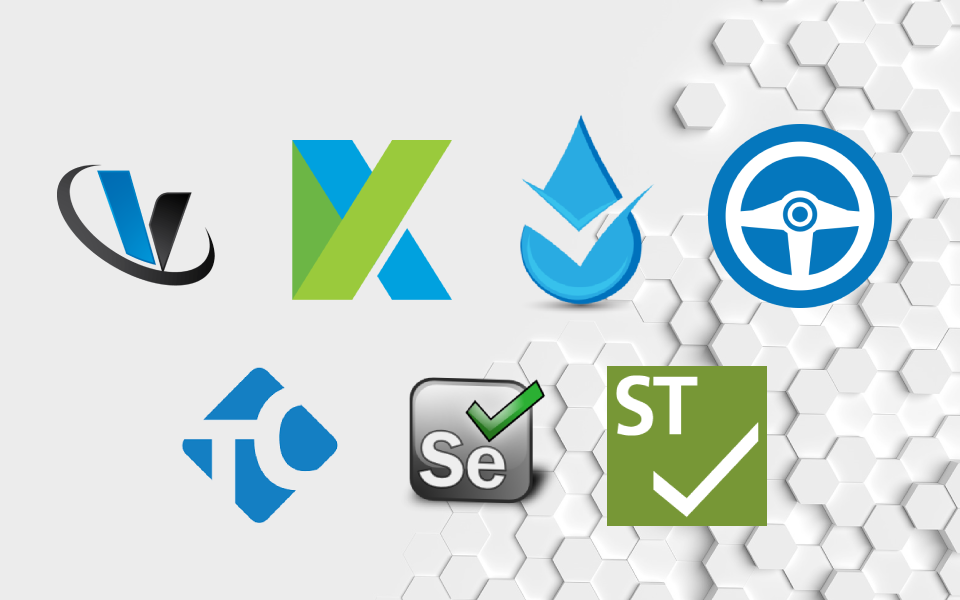 Nowadays, there are numerous test automation tools that help QA experts accelerate a QA procedure and offer the best opportunities for optimization of regression testing.

Each QA engineer composes his tech stack according to his own preferences and project requirements. However, below you can find a list of the most convenient and helpful regression testing tools:

It is indeed impossible to overestimate the importance of regression testing. It helps provide high quality, reassuring that any changes, either tweak or substantial, have not harmed earlier developed functionality. Due to the repetitive nature of regression testing and the constantly increasing number of test cases, it makes sense to automate it. In fact, automated regression testing has already proven itself as fast, convenient, and cost-effective. Properly maintained, it can significantly optimize a QA procedure and improve the quality of large-scale projects. The main thing is to choose the right tool and strategy.