When to Automate Software Testing?

These days test automation is mainstream in the QA industry that is gaining momentum rapidly. QA experts have highly appreciated the numerous advantages of test automation and make active use of it to ensure quick delivery of high-quality products. However, to reap the benefits of test automation, it is essential to know how and when to use it properly. Read on if you want to make heads and tails of this testing type.

What is Test Automation?

Manual vs. automated testing: how to determine which you should use

Manual testing versus automated testing or humans versus machines. Science and technologies are continuously developing. What seemed to be impossible a few years ago has become a norm for us today. These days test automation is rapidly evolving, and some QA experts even predict that it can completely replace manual testing. Is that true? Let's try to find it out and compare both techniques in particular aspects.

Traditionally test automation is considered to be rather pricey. The initial investment is indeed significant as automation tools can be costly. However, when it comes to manual testing, the labor costs are continuously increasing as a project is developing. More and more testers are required to cope with testing within a scheduled time framework. So, for large-scale projects, test automation can be more effective and more cost-effective.

Automation testing can be performed much faster. Still, it is worth remembering that test automation also requires some time as a test automation framework should be built, test data should be prepared, and scripts should be written. That is why if a project is rather simple, it can be easier to leverage manual testing than to waste your time and money on automation.

As a project is growing, the number of tests is also increasing simultaneously. While just a few automation QA engineers can cope with test automation, an army of manual testers can be required to carry out all tests in time. In this case, manual testing is not rational.

Whereas a human is the main tool of manual testing, automated testing utilizes a wide range of tools integrated with a test automation framework to provide consistency and effectiveness.

At the project outset, when a product is not stable enough and can undergo numerous changes, it does not make sense to use test automation as constant script maintenance will cost you a lot of time and money. Besides, any newly implemented feature should be tested manually at first, and only after that, a corresponding script can be created.

As well as not all tests can be performed manually (You remember about performance testing, don't you?), test automation is not a nostrum too. There are certain test scenarios that cannot be automated.

Even the most skilled and experienced manual testers are not insured from mistakes, especially when they have to deal with monotonous and boring tasks. In its turn, automated testing does not miss out on any tests and detect all bugs covered with a test suite.

In terms of flexibility, a manual tester is a clear winner. While verifying one function tester can detect defects in others along the way. On the flip side, automated tests check software in strict correspondence with predefined scope, and there is no place for improvisation in automated testing.

As you see, both approaches have merits and drawbacks and cannot be interchanged in particular situations. So it is reasonable to use a mix of manual and automated testing to get the best possible results.

When to use automated testing 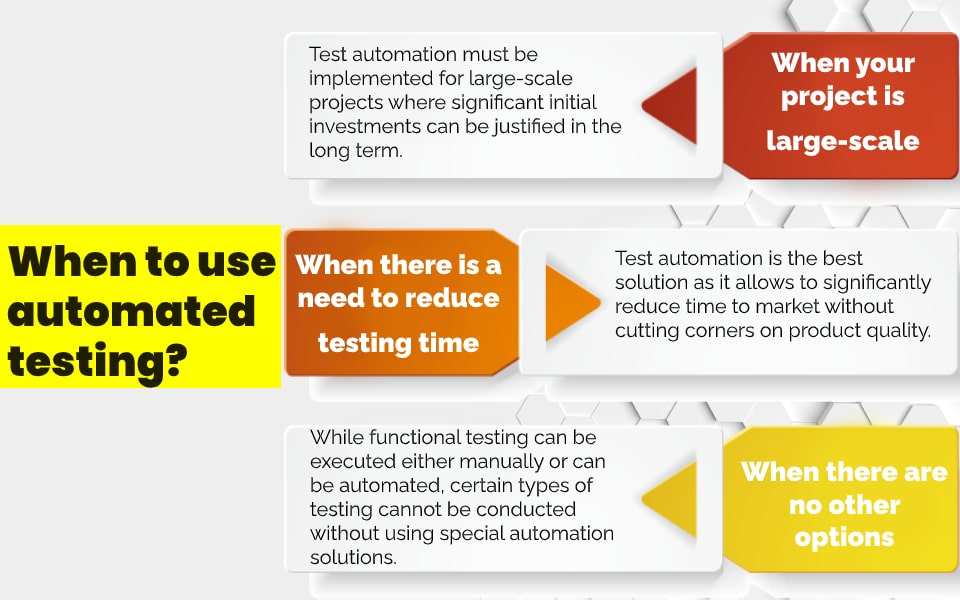 In spite of all its numerous advantages, test automation is not one-size-fits-all. Whether its usage is reasonable depends on the project type, software development phase, and test scenario. In other words, it is not always possible or beneficial to automate testing.

Before making a final decision on test automation and flinging yourself into script creation, it is vital to assess its efficiency and cost-effectiveness carefully. So, let's consider some general situations where it is advised to leverage test automation.

When your project is large-scale

Test automation must be implemented for large-scale projects where significant initial investments can be justified in the long term. Besides, in such projects, manual testing, i.e., exclusively manual testing, is not effective, and only a legion of manual testers can complete testing in time.

In general, test automation is a must for Agile projects with a CI/CD pipeline. Agile teams deal with frequent iterations to deliver software products to customers at higher rates. Such a necessity for speed can adversely impact software quality, which is not acceptable as well. In this case, test automation is the best solution as it allows to significantly reduce time to market without cutting corners on product quality.

When there are no other options

While functional testing can be executed either manually or can be automated, certain types of testing cannot be conducted without using special automation solutions. This refers to such performance testing types as stress and load testing, where a particular number of users or specific loads are emulated with special tools.

Automation provides a lot of advantages but just on condition that its implementation makes sense. Newbies may have a strong temptation to automate every single test. But it is a rude mistake. Before getting to test automation, you should consider all advantages and disadvantages to make the right decision. In these terms, it is indeed important to choose the right tests and make sure that automation will be cost-effective, let save a ton of time, and simplify QA procedure. As a rule, experienced QA engineers consider in the first instance the following tests:

Test cases of high priority - It is reasonable to automate tests verifying critical functionality, which failure may lead to significant damage.

Tests run on multiple occasions - There is no doubt that there is nothing more boring than to perform the same task again and again. Tests of repetitive nature are not only time-incentive and tedious but prone to errors. For this reason, regression testing, as well as smoke testing, is the first candidate for automation.

Tests run against various configurations - It is a good practice to automate tests that must be run on different OS and web browsers. Taking into account the fact that multiple combinations of OS and browsers are available today, automation enables QA teams to save plenty of time and effort.

Data-driven tests - Tests that must be executed in the same way but with various data inputs or huge data sets are also contenders for automation.

Performance tests - There are just no other options. Such performance testing types as load testing and stress testing are always conducted with particular tools as there is just no opportunity to execute them manually.

Time-consuming tests - All tests which require plenty of time to be completed can be considered for automation, too. Long end-to-end scenarios are an excellent example in these terms.

Advantages and disadvantages of automated testing 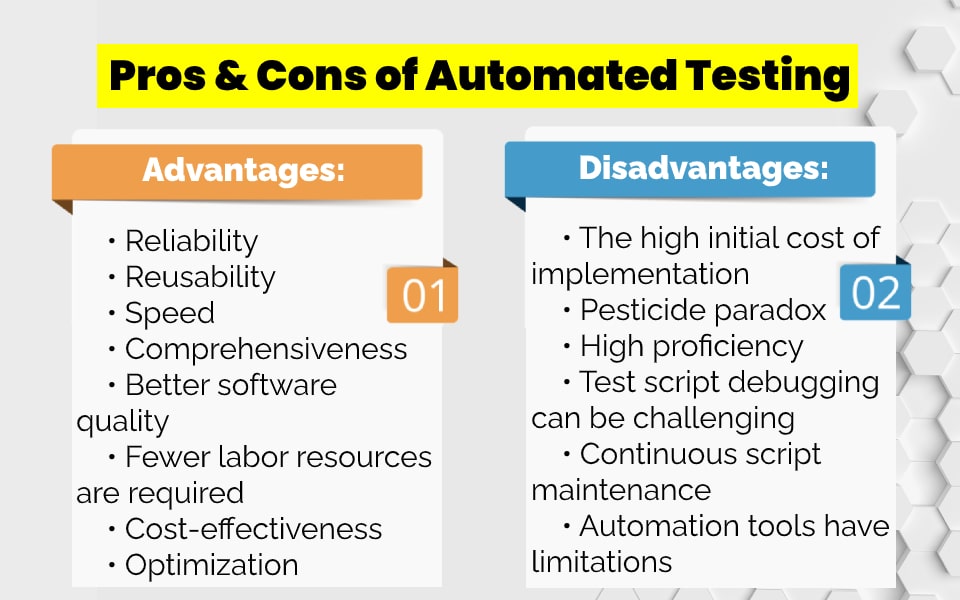 Automated tests perform the same preprogrammed operations all the time, ruling out the possibility of a human error.

Automated tests can be rerun as many times as needed on different versions of an application and various combinations of OSs and web browsers.

Tests can be run automatically at any time of the day or night with no QA engineer interaction.

Test automation can provide a high test coverage as all required tests can be run fast.

If test automation has been properly implemented and scripts are regularly maintained, you can get excellent results as even the most time-consuming tests can be frequently rerun.

A few automation QA engineers can maintain automated testing. It reduces the dependency of testing on the availability of labor resources.

Despite the significant initial investment, test automation is cost-effective in the long term because, as it was mentioned, there is no need for a vast workforce.

Test automation not only speeds up QA processes but provides QA engineers with an opportunity to concentrate on other more critical, creative, and interesting tasks.

The high initial cost of implementation

Test automation comes at a price. That is why a cost-benefit assessment is required. For some projects, it can be considered as a misinvestment.

Being preprogrammed, scripts cannot detect bugs going beyond their frameworks, while a manual tester can find bugs on the fly.

Only experienced and highly-skilled automation QA engineers are able to create effective test scripts and maintain them properly.

Test script debugging can be challenging

Sometimes when testing fails, it can be difficult to identify at once whether it has been caused by a defect in an AUT or test automation scripts.

To avoid test failures, it is compulsory to keep up with software development and modifications by maintaining the scripts correspondingly. Besides, test data should be regularly checked and maintained as well.

While automated tests can detect a lot of bugs in an application, they are still not versatile. There are certain scenarios that cannot be automated. The classic example is usability testing performed only by manual testers, as not any automation tool can cope with this. 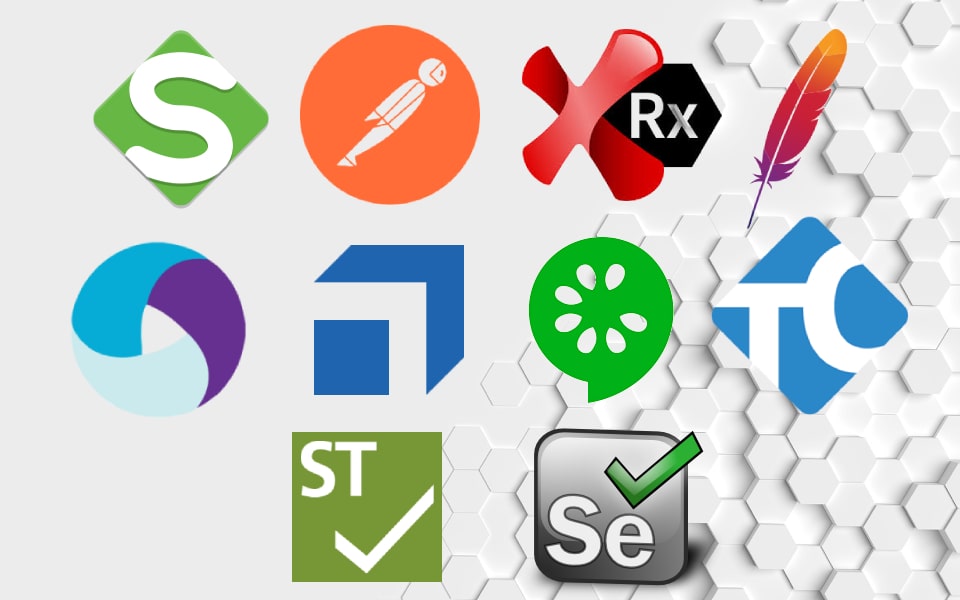 Today plenty of automation testing tools are available on the market. Some of them are open-source, others are paid, some can be used to test API, web apps, desktop apps, or mobile apps exclusively; others are versatile in this context. Besides, some tools can be meant for a particular type of testing, e.g., just performance or functional testing, whereas others offer a consistent toolset supporting almost all testing activities.

Below you can find the most famous automation testing tools that automation QA engineers from all over the world regularly use depending on test objectives:

Test automation has proved its efficiency and convenience. Still, it is indeed important to take into consideration the most various factors before start implementing it.

Test automation can be a must in some cases and can be inappropriate in others. In other words, test automation requires preliminary analysis and assessment to make sure that its implementation will be indeed beneficial in all respects. This article highlights the main aspects worth considering to get the most out of your test automation and provide products of high-quality.